Just Shut Up and Jump!

Are you waiting for the perfect moment to launch?  Does the thought of starting something right now scare the heck out of you? 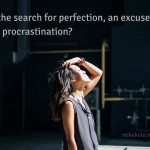 Whatever it is you are thinking about doing. Whether it’s launching a new product, trying a new system, or changing a bad habit, are you using perfectionism as an excuse?

I heard this term this week on the EOFire Podcast.  Belinda Ellsworth used it, and I was struck with its profound simplicity.  How often are you faced with a decision that you put off because you don’t have ALL the information?  How many opportunities have you missed because of these delays?

I was invited to deliver a Keynote last night at the Ross School of Business in Ann Arbor.  There were several speakers in attendance, and one had a very similar yet simple message.  When those voices in your head are telling you hold on. Or you hear them saying be careful. Just “Shut Up and Jump” … She was speaking more specifically about jumping out of an airplane, and a tee-shirt that was being sold in the lobby, but I believe these two concepts are the same.

Perfectionism, waiting for everything to be just right.  All the stars and the moons are in alignment.  Your voice in your head is telling you not to jump, but sometimes you just have to tell them to shut up and jump!

Reid Hoffman, founder of LinkedIn, is credited for saying, “if you weren’t embarrassed by the first product you shipped, you waited too long”.  Don’t use perfectionism as an excuse, don’t listen to all the little voices in your head, just shut up and jump!

If you are having difficulty listening to those voices, download this simple .pdf on goal setting.